The summer was dry. The recce weekend was dry. Plenty of weekends, long runs and mountain days were even sunny and warm. Well that all ended on Thursday 2nd October – 2 days before the inaugural 3×3 Ultra Trail.

I woke up early on the morning of Friday 3rd to heavy rain. The kind that had been beating down all night. Things were not looking good for the race. I proceeded to make my way to the ferry for the 6.30am boat across to Scotland, and subsequent driving south to Keswick in the Lake District. It rained heavily the whole time. If the rain stopped now the race would still be a wet one.

Fast forward to race morning and it was an early start. The alarms went off in the dorm at 3.45am, although one nervous runner had been up most of the night/morning packing and unpacking gels into his Salomon pack. I’m thankful for ear plugs, as he didn’t bother me half as much as the others. I slept well 🙂

I drove over to the race start at Crow Park, giving roomies Matthew and Ash a lift. When we arrived I didn’t want to get out of the car. The rain was so darn heavy. I handed Ash £7 for a full day ticket and sent him to the ticket machine. A wet price to pay for his lift :). The runners were all huddled together near the start line, we cleared our dibbers, and waited for Ian Mulvey to deliver the race briefing at 4.45am. It was an upbeat affair, as he reminisced about how great the summer had been…. right up until yesterday! Thanks Ian!

The whistle blew and off we set a few minutes after 5am. I nudged my way closer to the front than I would normally start, as I didn’t want to get stuck behind a line of overly cautious runners on the wet trails. 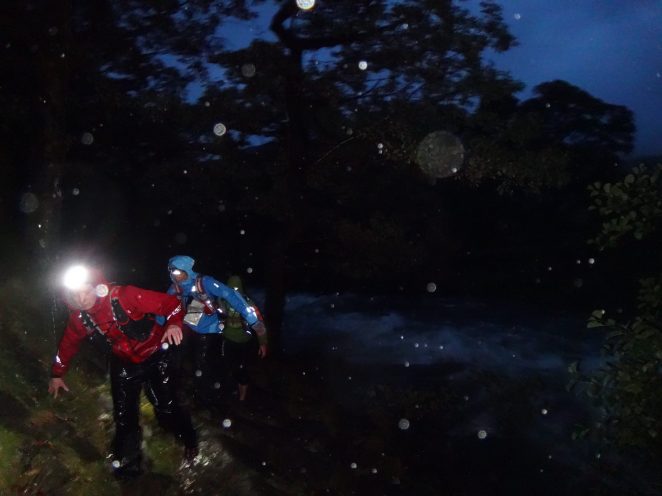 Do you see the river in the background? It was nice wading through that.

The race got underway with the rain coming down in sheets. Dam it was wet. Really wet. It was also pitch black and every trail was a river! Not just any old river – the kind with raging white water. It was hard to believe a race was going on in such conditions. I thought to myself ‘the course markers will be washed away’. In large sections the trails could not be seen, as the rivers had burst their banks and engulfed the surrounding areas. I can recall several occasions which required waste high wading against strong currents. On the bright side I was passing plenty more overly caution ‘trail’ runners. Happy days. My fell running mindset was paying off! That mentality to take the direction and shortest route at all costs worked out well!

Just short of 2 hours (1.49) in and the feed station lights of Seathwaite appeared across a field. I was reasonably pleased with the wet section. It went well with the exception of a missed turn, costing about 5 minutes!

Seathwaite
I didn’t need food nor water. I could have sucked on my jacket if I needed a drink. I was drenched. I turned off my headtorch at this point and kept going. This helped me get back in front of the runners who didn’t take a wrong turn.

The climb to Sty Head was steady and runnable, and at this point I took on water while crossing the river. It was getting colder now as the darkness of night was replaced by low level cloud. The clag. I knew I would see you this day!

The big man Simon Banks was on marshall duties at Sty Head. It was good to see him. He’s a good laugh. I dibbed in at the checkpoint and continued in the new easterly direction of Sprinkling Tarn. This was the first of the steeper climbs, and I knew having had a good start through the technical wet section, I would now lose time to the stronger climbers. True to form I was caught and passed, one of those racers was recce chum Matthew. He’s a strong runner, and I expected he would finish the race an hour ahead of me. More on that in Part 2! The Scottish lads David & Bob also passed me at this point. Not to worry though. I thought they were ahead already!

Past Sprinkling Tarn and on to Esk Hause before a descent to Angle Tarn and some nice fell running on the way over to High Raise. Enjoyed all of this, although I was cold. Really cold. By the time I started the climb to the unmanned checkpoint of High Raise (762m) my hands were numb. I couldn’t feel my fingers at all, and with the rain I had to ditch my gloves too. I have learnt before that wet gloves just make your hands colder. Off they came. I just had to ignore the numbness and push on. I said to myself ‘you’re only cold until you get over this mountain. You’ll heat up on the descent’. True it was too, and as I descended through ‘The Bog’ to the Wythburn checkpoint and feed station, I warmed up as expected.

5 hours in and 37Km into the race. I decided to grab a cup of tea, caramel square, and also changed my top half into dry clothes from my drop bag. The race was going well enough. Helvellyn and Skiddaw to go.

To be continued in part 2.

A round of 600 metre peaks in the Mourne Mountains