Summer comes to Ireland for a few weeks every year, and while we had a reasonable July, early August had been pretty wet and muggy, so by the time our family holiday came along I was only too happy to jet off to Limone Sul Garda, in the picturesque north east of Italy, for some much needed R&R!

The focus of the trip was to eat pizza and ice cream, drink wine, and generally relax and do touristy things with my wife. BUT as with all runners, the kit gets packed too, as the training must continue! The only condition was that it had to be done before breakfast. Fair enough 🙂

Limone happens to host a race on the Skyrunning race calendar, so it goes without saying that a wee jaunt around parts of the race route were on the menu! The first of which was a great run out and back on the last section of the course. This covered 760m vertical in 7km. Much of this was technical, with steep climbing over jagged rocks, but with some nice ascending switch backs which kept it runnable! I think on this day I was scheduled for an ‘Easy run’. Oups! 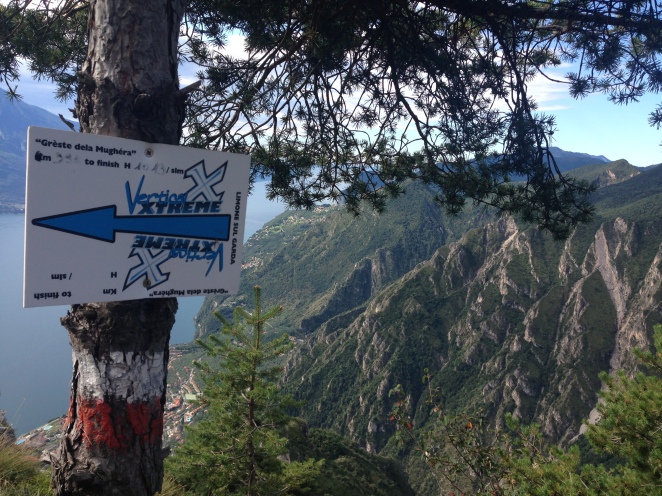 The last run of the week was probably the most noteworthy, so I’ll skip straight to it! Having looked through some maps I decided to take a route up the valley beside the main river into the town. From here I picked up a narrow forest track which wound it’s way up towards the summit of Cima Mughera (1250m). The views from here were superb. I had clear viewed for miles in each direction – truly spectacular. This is one of the reason I run over mountains.

The camera doesn’t do it justice.

On the descent I touched lucky, as the trail which I was hoping to find just happened to be the VK (Vertical Kilometre) trail used for the Skyrunning uphill only race. Awesome!

This offered up a most excellent descent, which included undulating trails, exposed ridges and steep roped sections! I was so blown away by the trails that I stopped a dozen times to take photographs. The trails continued all the way down to the old town, finishing only a few hundred metres from our hotel….. and breakfast. Perfect 🙂

If you’re ever in Limone do yourself a favour – run these trails.

A classic round of 600 metre peaks