Thursday evenings usually consist of 2 hours indoor ‘rock’ climbing followed by approximately 2 hours training with my running club. This past week was no different, and the agenda for the running segment was 8 hill repeats at Shaw’s Bridge. This is usually a good session, as the run out and back, combined with the hill reps, totals 12ish miles.

Off we set on route to Shaw’s Bridge at a chatty pace. It was a cold night (2c), but it was dry, so all was good (or at least that’s what I thought)! My calves felt a little tight on the out route, but I thought it was nothing to be concerned about – I had been training a good amount, so maybe it was just a bit of muscle fatigue.

During the earlier part if the night I had been joking with a club mate that I was going to go out and shave some time off my Strava segment for the Shaw’s Bridge hill. I said it would be an all out effort, just for fun, and it would almost definitely affect the remaining 7 reps. Well that’s exactly what happened and more.

I went out of the blocks like a proper runner, charging to the front, dodging my way past club mates which I normally only see from behind. I surprisingly sustained this for the duration of the hill, miraculously recording a 1.59, taking a whopping 9 seconds off my previous best. I didn’t realise at the time, I thought I had only shaved off 1 or 2!

The session continued and after the initial sprint I slowed back down to a more manageable pace, but after 3-4 reps I started to feel a slight pull on my right calf. This continued and only got worse, so much so that by rep 5 I was limping down the hill. Enough was enough! I decided to call it a night. The only problem was the 6km limping jog back to my car. It was a slow and cold trip back, I was even caught and passed by my club mates who had completed all 8 reps. A few others tired or had niggling injuries, so I had some company for part of the journey at least!

Once I got home and tweeted my injury for sympathy, it was time to get ice on the sore bits. I then sprayed on magnesium oil before bed, as well as a healthy dose of Tumeric and vitamin D to help with the inflammation and muscle recovery.

The weekly long run was scheduled for Saturday morning, so I didn’t have long to recover. That said another friend had mentioned a hydro pool for recovery, so the next day I took him up on the offer. 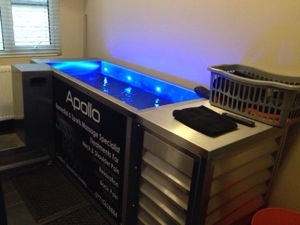 The session cost £5 and lasted the guts of 15 minutes. At first it was agony, my legs felt on fire they were so cold. I was surprised as I’ve previously been in these pools after marathons. I suppose the difference being that after a run my legs at least would already be cold!

After my legs thawed they started to feel really good – no niggles or tightness. Only time will tell however if this has been enough…

One thought on “Nursing an injury!”

A classic round of 600 metre peaks